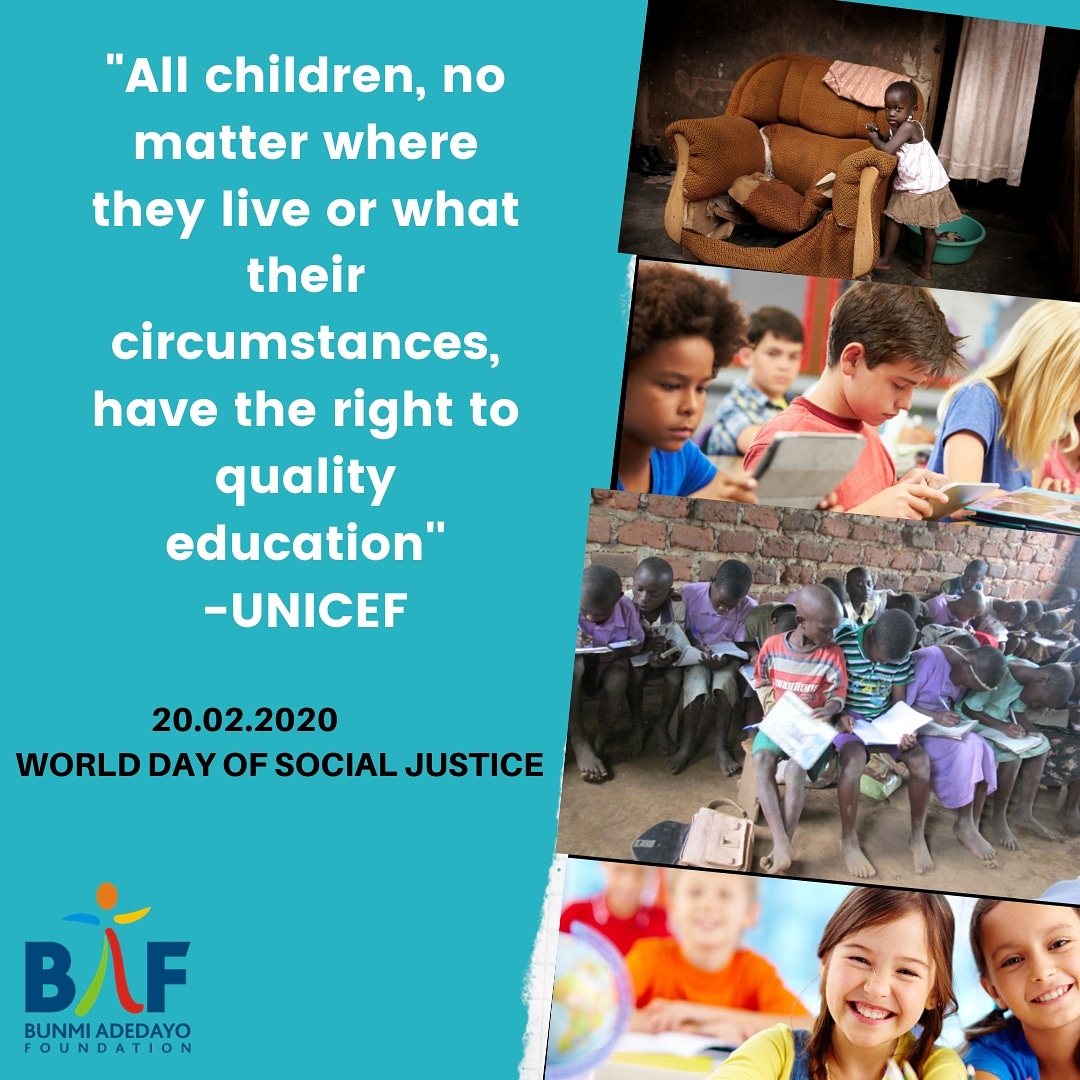 PUBLIC PRIMARY EDUCATION AND THE GROWING INEQUALITIES GAP IN NIGERIA

On 26 November 2007, the United Nations General Assembly declared February 20th as the World Day of Social Justice. The theme for this year’s celebration which is “Closing the Inequalities Gap to Achieve Social Justice” is of significance to organizations like the Bunmi Adedayo Foundation (BAF) as fighting inequalities lies at the core of our work and mission.

Globally, non-profits like BAF work to banish all the forms of inequalities that excludes billions of people from full participation in the political, economic, and cultural systems that shape their lives.

The Ford Foundation, a grant-making organization that works to promote social justice around the world has identified  some five drivers of inequalities to include: entrenched cultural narratives that undermine fairness, tolerance, and inclusion; failure to invest in and protect vital public goods such as education and natural resources; unfair rules of the economy that magnify unequal opportunity and outcomes; unequal access to government decision making and resources as well as persistent prejudice and discrimination against women, people with disabilities, racial and ethnic minorities.

What is Social Justice?

Social justice is defined as a concept of fair and just relations between the individual and society, as measured by the distribution of wealth, opportunities for personal activity, and social privileges. In the current global grassroots movements for social justice, the emphasis has been on the breaking of barriers for social mobility, the creation of safety nets and economic justice.

Inequalities present barriers to social justice because it connotes the presence of unequal opportunities and incentives for varied social statuses in a community or a state.  A 2017 report by Oxfam International, a non-profit focusing on the alleviation of global poverty observed that: “In Nigeria the scale of economic inequality has reached extreme levels, and it finds expression in the daily struggles of the majority of the population in the face of accumulation of obscene amounts of wealth by a small number of individuals. While more than 112 million people were living in poverty in 2010, The richest 4Nigerian man will take 42 years to spend all of his wealth at 1 million per day”.

Social justice theorists agree that equitable and quality education for all is key to reducing all forms of inequalities. To reduce the burgeoning gap between the haves and the have-nots in Nigerian society is possible through improved investment in and access to quality education for the poor.    The late Nobel Peace Laureate Nelson Mandela is famously quoted to have said that “Education is the most powerful weapon which you can use to change the world”

Education ranks high among indicators used by the United Nations for measuring the Human Development Index (HDI) for countries and for a good reason. The top five nations on the global (HDI) rankings have one thing in common; these countries (Norway, Switzerland, Ireland, Germany and Hong Kong) have some of the best education systems in the world.

When the poor have opportunities to gain currently relevant skills and knowledge, they are empowered to break the cycles of illiteracy, unemployment and poverty. An investment in quality basic education for all is the surest way to enhance social mobility in any nation.

Speaking at the launch of the Bunmi Adedayo Foundation in 2016, the former Vice-President of the World Bank’s Africa division Dr Oby Ezekwesili explained that social justice is attainable when there is: “intentional effort to include more people rather than exclude more people from the process of governance. According to her, Nigeria must create inclusiveness in governance as “improvements are better when there are more people working towards it and as people are included in working for progress, they must be included in sharing the benefits of progress”

How the Bunmi Adedayo Foundation (BAF) Works to Reduce Inequalities

As an organization working to improve learning and life outcomes for children in public primary schools in Nigeria, the Bunmi Adedayo Foundation (BAF) was initiated with the overarching objective of reducing the inequalities gap and promoting social justice for children from less privileged families through access to quality education in public schools.

At BAF, we recognize the need to focus on improving access to quality educational opportunities for children born to parents on the economic margins of society. Poverty and economic constraints are commonplace in families of these children whose opportunity to escape illiteracy and poverty may only be found within the walls of public primary schools.

Our work is based on the need to address an evident national emergency. As of 2015, Nigeria ranked 103 out of 118 countries in UNESCO’s Education for All (EFA) Development Index.

The United Nations International Children’s Emergency Fund (UNICEF) reckons that: One in every five of the world’s out-of-school children is in Nigeria. About 10.5 million children aged 5-14 years are not in school in Nigeria. Also, only 61 percent of 6-11-year olds regularly attend primary school while only 35.6 percent of children aged 36-59 months receive early childhood education.

The situation is even more disturbing in Nigeria’s North-Eastern states of Borno, Yobe and Adamawa where the net primary school attendance rate stands at 53 percent.

With the ongoing support and collaborations from our corporate and individual partners, donors and volunteers, the Bunmi Adedayo Foundation is improving teaching and learning outcomes in public primary schools under two broad intervention areas. Our interventions focus on enhancing the professional capacity of teachers and addressing infrastructural challenges in public primary schools.

Through our education intervention initiatives, the BAF impacts over 65,000 pupils from public primary schools across Lagos state annually.  We continue to improve the pedagogic capacity and morale of class teachers along with the education management capabilities of school leaders.

Also, our infrastructural improvement programs have enabled the remodeling of dilapidated school buildings, setting up of state-of-the-art libraries and ICT/digital labs at our beneficiary schools.

“All children, no matter where they live or what their circumstances, have the right to quality education’’ –UNICEF.

Join us to even the odds, promote social justice and banish inequalities in support of children in public primary schools in Nigeria.